Discover how to consistently get perfectly cooked meats.
The experts on cooking shows make it look so easy. While chatting to the audience, chopping ingredients for side dishes and whisking whipped topping for dessert, they manage to a cook a steak to the perfect pinkness or produce a plate of scallops that would never taste rubbery. Cooking proteins of all varieties to their perfect (and safe) doneness isn’t a difficult technique to learn. It does require knowing the different temperatures for various proteins because the key to perfecting meat doneness is correctly using a kitchen thermometer.
Types of Kitchen Thermometers for Meats
The kitchen thermometer is a must-have for any cook and there are a few basic types available to use when determining if your meat is cooked to the perfect and safe temperature:

Instant-read Thermometer. Every kitchen tool drawer needs an instant-read meat thermometer, it’s a go-to device designed to take out the guesswork when cooking various proteins. From hamburgers to steaks, poultry, fish, and that succulent holiday lamb, this thermometer gets the job done. There are two types: dial and digital. Both have a stem that’s inserted into the meat to obtain the temperature reading. The dial version registers a temperature in about 15 to 25 seconds, while the digital hits temp a bit faster in approximately 10 seconds.

Oven-safe or Oven-going Thermometer. When you’re cooking that roast for a special family dinner, a meat thermometer that is safe for oven use can be helpful. There’s nothing worse than slicing into what appears to be the perfectly cooked roast while a table full of guests anxiously awaits, only to discover the center of the meat is still quite raw and even cold. The oven-going meat thermometer looks similar to the digital instant-read style, but it inserts into the roast and stays in while it’s cooking in the oven. This makes it easy to monitor the internal temperature and eliminate raw surprises.

Probe Meat Thermometer. Like the oven-going meat thermometer, the probe style also inserts into the meat and stays in throughout the cooking process. However, it’s a two-piece system instead of an all-in-one. The probe portion inserts into the meat and remains in during the cook time. The base portion of this thermometer does not stay in the oven, instead, it rests outside the appliance. This allows you to check the internal temperature of the meat without having to open the oven door. Certain probe meat thermometers are even portable and allow you to take the base portion with the temperature read-out into another room so you can join the rest of your dinner guests. Some versions feature an alarm that signals when the desired internal meat temperature is reached.

Microwave-safe Meat Thermometer. Like the name suggests, this type of kitchen thermometer is specifically designed to be used safely when cooking meats in a microwave oven. It's a leave-in thermometer similar to the oven-going versions.

Fork-style Meat Thermometer. A temperature fork looks like the long meat fork used when spearing and cutting larger cuts of meats like roasts and turkey. It has temperature sensors and a digital display readout and typically is used to test the doneness of meat when grilling.

Infrared Food Thermometer. This is a very easy to use thermometer that will give you an instant read on a variety of cooking temperatures. What's unique about this option is the versatility. You simply point the infrared thermometer gauge at the desired surface and pull the trigger. A laser will pinpoint the area and accurately measure the temperature. Whether you are testing the middle of the meat vs the outer edges, or the general surface area temperature, this is a great tool for busy kitchens, outdoor grilling, and other fast-paced environments. 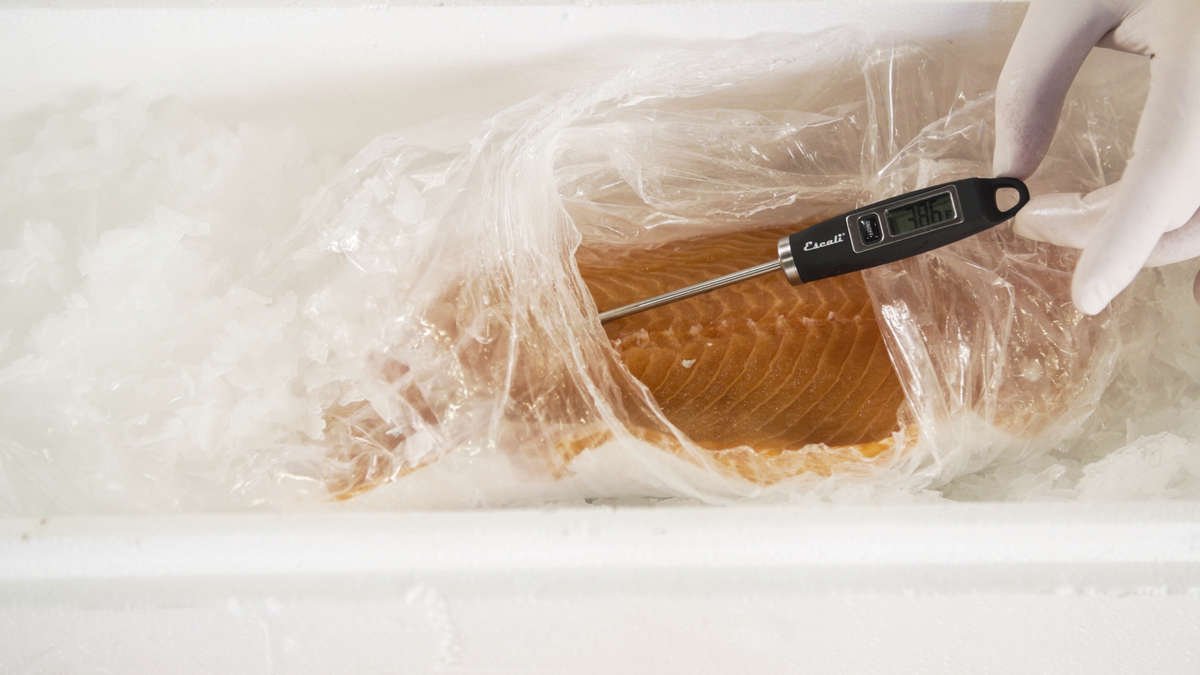 Is It Done? Know the Safe, Internal Minimum Temperatures
Have you ever cooked any type of meat and wondered, “Is it really done? Is it safe?” Every cook at some point has asked these questions. Without the tools or know-how, it’s easy to overcook and essentially ruin an expensive cut of meat. With a meat thermometer and the standard Safe Minimum Cooking Temperatures Chart from FoodSafety.gov, you can ensure your meats are cooked safely and to the ideal doneness.

Note: Health officials caution consuming raw or undercooked meats to avoid being infected by E. coli O157 and other germs that can cause intestinal distress and other harmful illnesses.

You don’t have to memorize these safe minimum cooking temperatures either. Many meat thermometers have indicators for specific types of meats right on the dial. You also can download a "meat temp" app for Apple® or Android products.
Meat Thermometer Technique Tips
Placement of the meat thermometer is important for an accurate temperature reading. Always avoid placing it too close or touching any bone. Other areas to avoid are any with fat and gristle. For thicker cuts like roasts or even thick cut chops and steaks, insert the thermometer into the center of the meat or at its thickest point. Try to hit about two-inches deep or to the point that’s marked on the meat thermometer stem. This also works for a meatloaf, but for burgers, thinner chops, or boneless chicken breasts, insert the thermometer stem into the side. For whole poultry, insert the stem or probe into the inner thigh but close to the breast, avoiding bone. 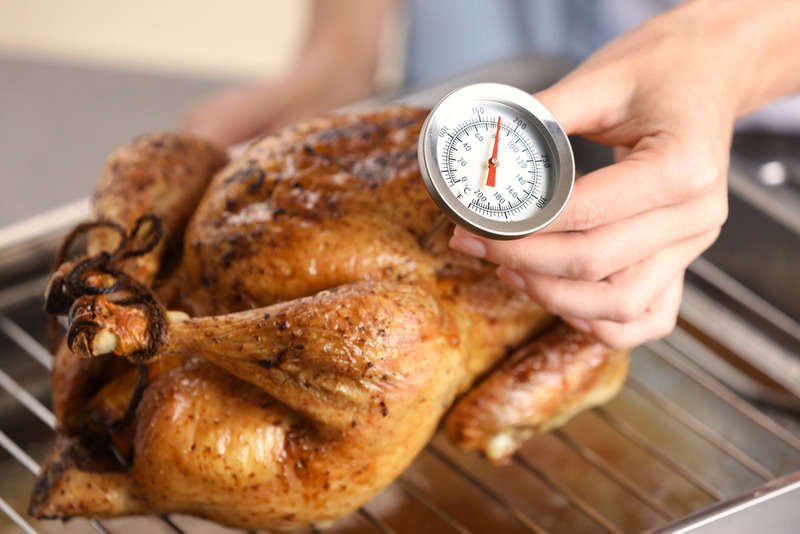 When to Check the Temperature
It’s recommended to begin checking the meat’s temperature approximately 30 minutes before the timer dings. If the recipe states a 90 minute cook time, then check it at the 60-minute mark. When cooking smaller cuts of meat like chops or chicken breasts, test it about 10 minutes prior to when you originally estimate its doneness. This time frame applies to most cooking methods, from the oven to the stovetop, grill, and microwave.
To Rest or Not to Rest
Rest time, also known as carry-over cooking, is important with certain cuts of meat like larger roasts, loins, and turkeys (stuffed and unstuffed). Once the meat is pulled from the oven, these larger cuts don’t just stop cooking. Their internal temperatures continue to rise even after removed from heat. This is called the rest time. On average, it’s best to give these cuts at least three to five minutes or more of rest time. The FoodSafety.gov chart does include timing for carry-over or rest-time cooking.
Beyond the Meat Thermometer
Kitchen thermometers extend beyond probing the temperature for perfectly cooked meats. You’ll want a candy thermometer when making goodies like caramel sauce for desserts and every kitchen needs appliance thermometers. While today’s high-tech refrigerators come equipped with an array of digital readouts, a basic refrigerator thermometer slips easily onto a shelf and lets you know if the appliance’s temperature is at the right level. The FDA recommends that the interior of the refrigerator be kept at 40-degrees Fahrenheit or colder and the freezer at 0-degrees Fahrenheit.

With a little bit of know-how and a reliable kitchen thermometer, it’s possible to cook delicious meats to the perfect and safe temperature every time.

Where to buy kitchen & cooking thermometers?
Dean Supply carries an extensive line of cooking and meat thermometers for every kitchen. No matter if you are cooking for hundreds at your restaurant or your family a few nights a week, it is so important to practice proper food safety routines, which include maintaining safe temperatures. We make it easy by offering oven thermometers, freezer/refrigerator, pocket thermometers, probe thermometers, and many more in stock and at our best prices. Shop now and see why you can always rely on Dean Supply!

To outfit your restaurant with the latest in high-quality food thermometers and stay up to date on all the latest trends and deals, visit shopatdean.com or contact us at help.desk@shopatdean.com. We've been helping Cleveland area and beyond outfit businesses and homes with professional kitchen and bar supplies for more than 65 years and we'd love to help you achieve your goals.
Recent articles